Ordinarily, this post would have been written months ago… But there has been nothing ordinary about the last few months. We’ve been more than a little discombobulated and it’s taken a while to adjust, while also keeping up with a busy ministry diary schedule. 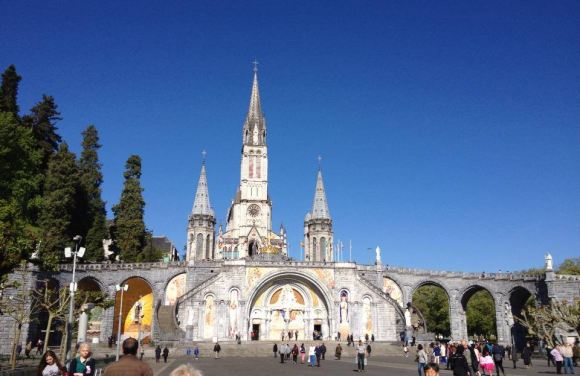 This year’s Diocesan Lourdes pilgrimage was especially significant for us because it was the last engagement that Mike had been actively involved in  planning the liturgies for. And though he wasn’t well enough to make the journey, he and his wife, Yvonne, followed much of the week’s programme with us from home by the wonders of webcam technology.  It was a wonderful and uplifting pilgrimage – however, our memory of it is forever entangle with our memories of Mike’s final days.

Lourdes: A Door of Faith
This year’s pastoral theme was carried through each of our main liturgies by the proclamation of the Apostles’ Creed and the singing of “This is Our Faith” composed by Alan Smith for the Archdiocese of Birmingham in this Year of Faith.

The other thread through the week was the sung response to the intercessions – Open up to us the Door of Faith. As the year of faith continues, this setting has proven incredibly useful and versatile in both school and parish.

SUNDAY – OPENING MASS
The opening Mass was celebrated on the Solemnity of the Most Holy Trinity. Alongside the Mass of St Luke and the Psalm setting from our growing online repertoire, we made a brave attempt at the Credo III. The Credo has been part of our “Lourdes repertoire” for some years now. One of the great blessings – and challenges – of leading music for the liturgy during our diocesan pilgrimages to Lourdes is finding a balance of the very new and the very traditional side by side.

MONDAY – GROTTO MASS
On Monday at the Podium Altar we were joined by the other English-speaking pilgrims, including the Middlesbrough Diocese who were celebrating the 60th Anniversary of their pilgrimages to Lourdes. The popular Responsorial Psalm setting Be a Rock O Lord written for the pilgrimage several years ago remains unpublished, but we’ll will endeavour to do something about that soon.

During the offertory we sang Faith, picking up again on the pastoral theme. The congregation quickly joined the catchy chorus, many clapping and swaying joyfully as they sang. During Communion, Dan Callow led a prayerful, debut rendition of O Marie, written by Mike Stanley and Andy Ross. A beautiful contemporary Marian song that became a firm favourite of the week and later featured in Tuesday’s Torch Light procession.

HOLY HOUR
Always one of the most moving liturgies during our pilgrimage, this year’s Holy Hour and Anointing of the Sick was particular poignant as we held Mike in prayer, knowing he was in his final days. In the presence of the Blessed Sacrament we sang Sing Over Us O Lord (unpublished) and O Christ the Healer. The latter being text by Fred Pratt Green, which we sung to a lovely lilting tune that Mike originally wrote for text Blest By The Sun, published in our Rejoice ‘n’ Sing Digital Song Book.

TUESDAY – HOSPITALITÉ MASS
In Tuesday’s liturgy, as well as giving thanks for the many who offer such dedicated service to the sick through the Hospitalité, we were also reflecting on the theme of “light”. Our opening song picked up this theme in the final verse: “I heard the voice of Jesus say I am this dark world’s light“. We used the Scottish tune The Rowan Tree – although in a moment of confusion we almost ended up singing Kingsfold which fitted the text equally well.

The light continued to shine through the Responsorial Psalm, Thy Word and the offertory song, Graham Kendrick’s We Are a shining Light (Do Something beautiful).

THURSDAY – MAC’S MASS
Thursday’s Mass was animated by the pilgrims from “Mac’s Group”, many of whom have severe disabilities. Reflecting the them of “water” we had a Sprinkling Rite rather than a Penitential Act, singing Springs of Water (unpublished). Bob Hurd’s setting of Psalm 42(43) As The Deer Longs, served beautifully as the Responsorial Psalm and Mac’s Groups shared an unforgettable depiction of the Baptism of the Lord.

Celebrating our shared Baptism, as we prepared for the Liturgy of the Eucharist, we sang We Belong to God. During Communion we sang the ever-familiar O Let All Who Thirst and then raised our voices in thanksgiving with a rousing rendition of David Haas’ We Give You Thanks.

PENITENTIAL SERVICE
On Thursday afternoon we gathered in St Bernadette’s Gotto side once more, for the Reconciliation service with opportunity for confession. The opening song, Hosea (Come Back to Me) was followed by a Scripture reflection on forgiveness.  Picking up on the day’s “water” theme, we punctuated the reflection with the first verse of Graham Kendrick’s I Shall Be Clean Again.

There must have been something in the water, because there were still people waiting to receive the Sacrament of Reconciliation more than and hour later, when we finally sang  Amazing Grace as our song of the reconciled. As the Irish pilgrims who had been patiently waiting to access the venue after us filed in, we finished with a VERY abridged version of Joy of the Holy Spirit.

FRIDAY – CLOSING MASS
There was a fair bit of Latin in this final liturgy, and we had been working on our pronunciation and harmonies for days. Jean Paul Lecot’s Gloria from the Messe de Jubilee 2008 is a lovely lyrical setting that works well with our more contemporary guitar and piano accompaniment, although more typically played on the organ.  We also sang Sanctus de Lourdes and Morten Tuam. Gregorian chant purists would baulk at the though of us accompanying Morten Tuam with piano and guitar.  But we aren’t purists – we are about bridging the gap for a generation that may otherwise never really discover an appreciation for Latin or Gregorian chant at all.

Alongside the Latin Mass settings we had our calypso rendition of Sweet Heart of Jesus from Age to Age Vol. 1, and two songs that can only be described as CJM classics – Magnificat and Bread of Life – so well-known that the vast majority of the congregation sang them by heart.

After Communion, Archbishop Bernard Longley presented Jo (and Mike, just days earlier) with the Diocesan Ubi Caritas Award. A bitter-sweet moment, like so many others on this pilgrimage, that for all its heartache, was so filled with grace.

Our Lady of Lourdes – Pray for us.

Have you been to Lourdes in the Year of Faith? Perhaps you were there at the same time as us with Birmingham or another Diocese… We’d love to hear your own reflections in the comments below. 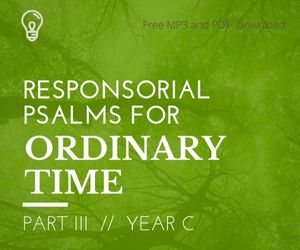 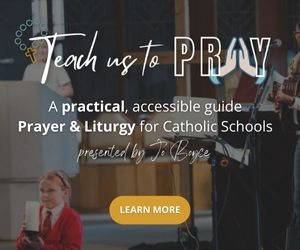