On the morning of 29th April 2003 a red van parked outside my drive. I went outside to see who the driver was and to my surprise it was Mike Stanley! I wondered what he was doing at my house, when I was about to ask him why he was here, when my mum came out grinning. Then I asked why Mike was here and she said “I’m going to Liverpool. Do you want to come?” I was speechless because she meant we would be going to watch CJM Music perform Born for This at Liverpool Cathedral.

My mum had packed a picnic for the journey. We had to go to the CJM offices to meet everyone else and pack the equipment into a mini bus. Once the bus was packed we all got in. Mike said a prayer with Jo for a safe journey, and we set off.

Three hours later we arrived in Liverpool and after a McDonald’s for lunch, we headed for the Cathedral. The Cathedral is called Christ the King Cathedral.

At the Cathedral my mum and I were introduced to the priest and the people who help run the Cathedral. They were very friendly. Then we had a look round the Cathedral – it is massive! Over the Sanctuary there is a huge metal crown. The crown represents the crown of thorns. Lights that look like candles light the Cathedral and this lighting is above the Sanctuary. Around the Cathedral there are gold Stations of the Cross. These are lit up because they are important. Jo took me downstairs where the workshop would take place with the young people who would be performing that night. 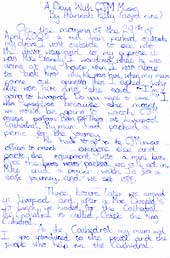 First, we warmed our voices up, the song was called “We thought that it was over“. I enjoyed that song. After a long practice I felt hungry so my mum and I had a little snack. Meanwhile Mike was setting up in the Cathedral. One of the most important things to check is the sound system. At first it wasn’t quite right because if you went too near the edge of the Sanctuary the sound would go too quiet and if you walked too far back the sound would go too loud. (This only happened if you were holding a microphone.)

When the sound check was complete all the people who would be singing and acting went downstairs to get changed into their black clothes and smarten themselves up. As well as that, some people had some pizza and a break, but not for long…

Now everyone was sent back up into the Cathedral for one last practice. During the practice I went round asking people how they felt about performing and the most popular feeling was feeling excited and nervous. I asked how Jo felt and she, like the others, felt nervous but excited and everyone would be perfect and there would be no mistakes.

At 7.30pm the performance started and the first song was “Bread of Life“. The actors looked confident and as though they were enjoying themselves.

I felt very happy because it was a great experience to spend a day with CJM Music and then watch the performance. I felt so calm and special because I was able to be here. I really enjoyed that day and I prayed that the performance would go well.

After fifteen stations the performance finished and I felt happy for those who had performed, my prayers were answered, Born for This went brilliantly

In my opinion Jo Boyce and Mike Stanley are excellent singers, and I can’t wait to see their next performance.

On the way back, we stopped to fill up with petrol and Jo bought herself, Mike and I a hot cocoa. It was extremely hot. I phoned my dad and he was just going to bed. I felt so tired that I fell asleep but I couldn’t sleep for long because I had had such an exciting day. I woke up when we were in Birmingham (at the offices). When we had unpacked I got back into the red van and Mike drove me and my mum home.

Thank you Jo and Mike!