It’s taken FIVE years for the How Can We Keep From Singing? Volume 3 Digital Songbook on CDROM to see the light of day. The main reason is that our small team just has too many projects on the go at the same time, while also trying to keep up with a hectic ministry diary. 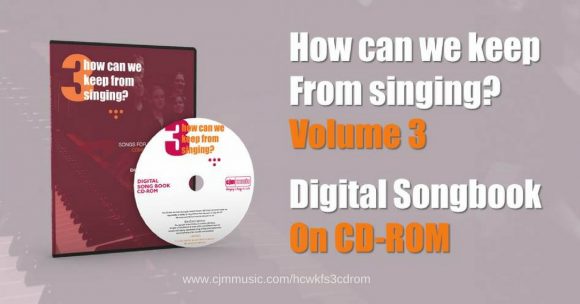 This project also has particular significance, because it was what we were working on when Mike Stanley was diagnosed with bowel cancer in December 2010. We’d finished recording the songs for the CD, so in her new role of attempting to do the work of two people,
Jo Boyce oversaw the final phase of the project and we released the audio CD in February 2011.

Five years on, a few detours, tears and learning curves later, the accompanying Digital Songbook on CD-ROM is at last ready too. It’s due for release on Friday 2 September 2016 – just in time for the new academic year.

The 14 songs in this collection have become firm favourites in our work and ministry and we know that you’ve been keen to get your hands on the sheet music resources for some time. We’re sorry it’s taken so long.

As a little thank you for your patience and prayerful support through these years, we have a special pre-release 20% discount for all advance orders before the official release date. Just click the link below to order you advance copy and it’ll be winging its way to you in the post on release day.