One keen young man, probably no more than 11 years old, took the time to count heads… He told me in the interval that there were 47 of us on stage! If you add 11 dancers, that makes a staggering 58 performers gathered to celebrate the life and musical legacy of Mike Stanley. 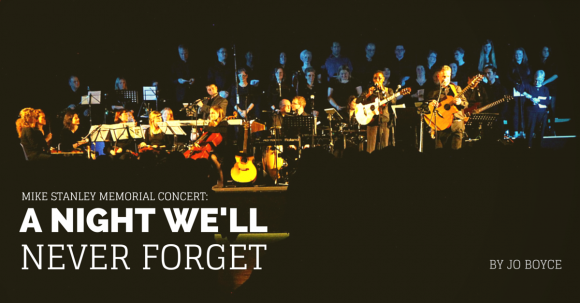 From the moment musicians and singers started arriving at 10am for rehearsal I knew is was going to be a special day. Each new arrival had that same look in their eyes, that needed no words…

It was good to be together, to perform together again. And we were going to give everything we had to honour the memory or our much-missed friend.  We shared our stories and our memories with laughter and tears. We ate together, prayed together, and we sang our hearts out.

At 7:30pm the sports hall of Bishop Walsh Catholic School was packed – close to 700 seats filled, the atmosphere charged with emotion and prayerful expectation. A powerful silence descended as the lights dimmed, the video rolled and Mike’s voice filled the hall singing “I’m coming home to my Father….” Then Mike’s long time friend, Doug Parker took to the stage to introduce the evening.

When choir and musicians took to their places and the first chord of the evening rang out, we embarked on a trip down memory lane, with some of Mike’s earliest songs from the Lead Kindly Light and Bread of Life cassettes. Many of the original musicians from those early recordings were actually in the line-up on the night – Andrew Moss, Dan Callow, Ian Reid to name a few.

The wonderful string sextet played Craig McLeish’s beautiful string quartet arrangement for Bread of Life, and Craig himself sang and played on He is Lord and Behold the lamb, sharing fondly about his 10 years as producer and arranger for the Boyce & Stanley partnership.

Under Craig’s guidance we had prepared to sing his 6 part vocal arrange of Ave Verum live for the VERY FIRST TIME. As the wonderful a cappella harmonies filled the hall, I just knew it was a moment that would have made Mike so proud.

Mike loved liturgical dance, and it was fitting that several of the pieces featured our dancing friends: Kevin, Oonagh and Danielle from More than Dance gave beautiful interpretation of Lead Kindly Light. All the way from the United States, Betsey Beckman, who we’d met many years ago at the Los Angeles Religious Education Congress, danced Child of Grace and Cath Pepper choreographed and led the beautiful finale – We Will Remember.

Video messages from a few friends who had been unable to attend provided a few momenst of pause between the music. We heard from Ant Harty, possibly the only musician who has played on everything we ever recorded; Tom Bonard, lead singer of Crossbeam who has played and sung with us many times over the years – including his 2006 appearance as Simon of Cyrene when we presented Born for This at Westminster Cathedral; and our dear friend David Wells, Director of Parish Formation for the Diocese of Plymouth, raised a few laughs with his recollection of the antics he and Mike used to get up to on our trips to the LA RE Congress.

Mike’s wife, Yvonne gave a beautifully courageous performance of Grace – the title track of Mike’s posthumously released album. And then came one of the most unforgettable moments of the evening: Mike and Yvonne’s three sons joined us onstage for May Your Love – Adam on guitar, Joseph on drums and little Luke on vocals beside his mummy. There is no denying that these boys have inherited their parent’s musical giftedness. The ovation from the audience said it all, and as one concert-goer wrote afterward:

“To see Yvonne and the boys was a great joy, knowing that God has them in the palm of his hands is consoling” 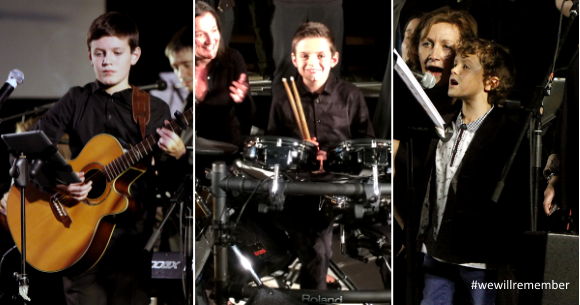 The night came to a close with a powerfully evocative rendition of We Will Remember. Although intended as a song of remembrance for those killed in conflict, it was impossible to sing it without having Mike foremost in our minds and hearts.

In remembering Mike, he was so very present with us that night. And how we wish we could have stayed there. Even in writing about it now, I want to keep writing, so that I can somehow stay in that moment…

But we could not build tents there… {c.f Matt 17:4} With tears in our eyes, we left the stage and continued the march into a future without our beloved Mike Stanley.

We will never, ever forget.

Were you there? We’d love to hear from you in the comments below…