On Sunday, 19th September, in a slightly soggy, but Spirit-filled Cofton Park, Boyce & Stanley, their 6-piece band and a 40-strong choir opened the programme for the beatification of Cardinal John Henry Newman. 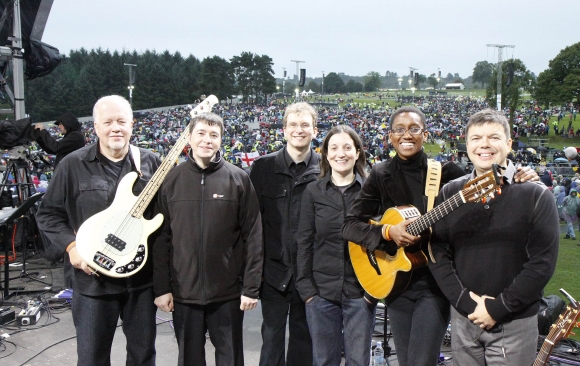 Using some of Newman’s prayers and other devotional writings along with a mixture of contemporary styled music including two new musical settings of Newman’s poetry, the service guided listeners through four key areas of Newman’s thought – Scripture, Eucharist, Mary and Mission before finishing with a rousing chorus of ‘Firmly I Believe and Truly’ to a rhythmic new tune.

Boyce & Stanley led the tens of thousands of pilgrims, who had been arriving since midnight, in song while the Rt Revd. David Urquhart, Anglican Bishop of Birmingham, Rt. Revd. Christopher Cocksworth, Anglican Bishop of Coventry and Rt. Revd. David McGough, auxiliary Bishop of Birmingham each added reflections and prayers.  Bernadette Kearney – former Midlands Today TV presenter – introduced and led the service, which was was broadcast ‘live’ on BBC Radio 4’s Sunday Worship.

The choir – made up of youngsters drawn from four Catholic Secondary Schools in the Archdiocese of Birmingham; Bishop Ullathorne, Cardinal Wiseman and Cardinal Newman schools in Coventry and the local Catholic secondary school St Thomas Aquinas – spent the night enjoying the hospitality of the Longbridge Methodist Community, who gave over their building for the group to practice and to sleep overnight on the Saturday before walking into Cofton Park at 5:00 am on Sunday morning.

‘It was amazing’, said one of the youngster, ‘it was a once in a lifetime opportunity’

We couldn’t have said it better ourselves. It was a very good day to be Catholic.