Had you been sitting in the window of McDonalds on Victoria Street on the night Born for This came to London town, you would have found your limp lettuce overshadowed by hundreds of people queuing around the block and disappearing into the Byzantine-styled splendour of Westminster Cathedral. 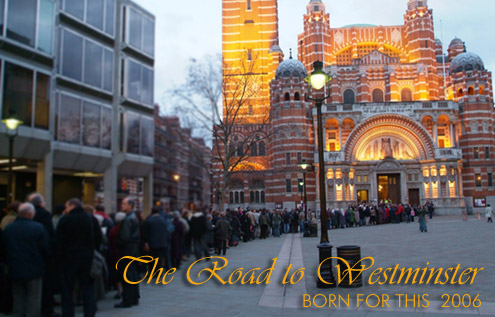 “Ah”, you may have thought, “here I am in the great city of London, putting the weight of the world on my hips, watching a very long queue and it’s starting to rain; how reassuringly British. I imagine they’ve been binge-drinking and are going to confession whilst expressing their disdain for young people.”

But, alas, as if to shatter the very foundations of this country’s reputation, this long queue of people had given up their regular Friday night activities – and literally travelled from every corner of the country – to support Jo Boyce and Mike Stanley and the many young people in the cast and chorus of Born for This to celebrate its 10th anniversary and debut at Westminster Cathedral. 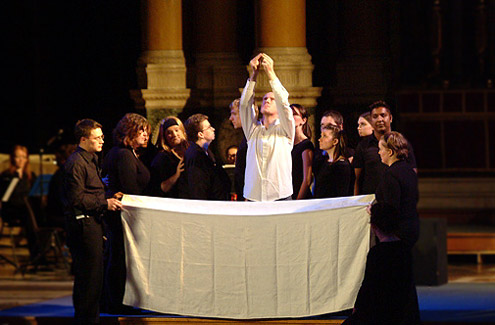 Young people have always been at the heart of Born for This. From its humble beginnings at Soli House Youth Retreat Centre, via small performances in the schools of the Birmingham Archdiocese to larger scale performances in the churches and Cathedrals of England and Wales.

The 14 musicians, 70 singers and 20-strong cast of narrators and actors were a vibrant mix of fresh first-timers and seasoned every-timers. Everyone could feel the heightened frisson of tension and excitement that hung over this performance. For those who had been part of Born for This since it was knee-high, this glorious setting was amazing – the significance of bearing witness and sense of occasion was palpable.

So Westminster Cathedral, with its daunting dimensions and grandeur, became the setting for the story of one man’s lonely, world-redeeming journey to the cross. As the echoes of the final refrain faded through the great nave a profound silence descended. Then, one thousand people rose to their feet to say their “Amen” with a slow, steady applause that seemed to last forever. There are no words to describe the privilege of being there to share that moment.

Born for This has truly grown and matured both in size and stature over the past 10 years and Westminster Cathedral, though vast, was – in the end – only just big enough to contain this yearning and passionate portrayal of Christ’s death and triumphant resurrection.

Thank you to everyone who came to share the journey and make the dream possible. We are really, really sorry about the queue.

“I just wanted to say a HUGE thank you for giving me the opportunity to take part in Born for This. I had never seen it before, so watched it for the first time on Friday night while I sat with the chorus… it was AMAZING! ” Libby

“I have never done anything like this in my entire life. I am normally the person who will hide behind someone else. I would encourage anyone who feels that they want to take part, it is a wonderful family to belong too.” Frank

“This was the first time I have been involved in the production of Born forThis. People I know who have been to watch, have been totally touched by the whole experience.” Debbie

“Just wanted to say a huge thank you and well done to you and all the cast and musicians for a wonderful reflection of Born for This last Friday at Westminster Cathedral. I took 2 of my friends who had never seen it before and they said it was the best Easter present they had ever received!” Rachel 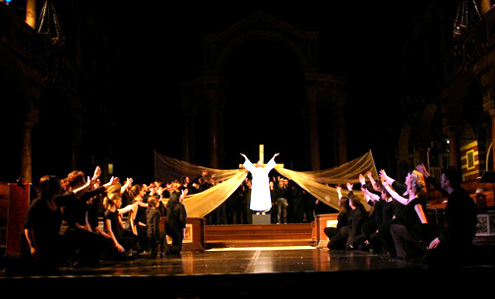 “The students I brought to sing in the chorus had an amazing experience and many who saw it were very touched. As always, you bring such prayerfulness to the piece and for me, it was like doing it for the first time!” Sophie

“I took a group of 9 – we are still talking about it. It was wonderful, amazing moving, thought provoking. Just splendid – thank you.” Jenny

“Many thanks for letting us be part of Born for This at Westminster. Our youth have not stopped talking about it. They sang all the way back on the train to Ashford, which amused the ticket collector! We have spoken to them as a group since and they said they actually felt part of the Passion and could understand more fully what it was like for Jesus and it has deepened their Faith” Louise