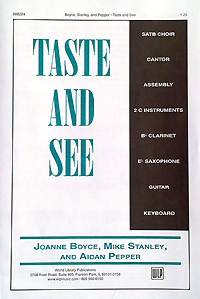 It was sure to happen sooner or later, but maybe we should have had a small competition to guess which of the many Boyce & Stanley liturgical classics would be the first to make it into print Stateside.

The Communion processional song, Taste & See, with its unusual structure of simultaneous ostinato refrains has recently been published by World Library Publications as part of their “contemporary series”.

Taste & See began life in a John Fowler Holiday Park chalet while the CJM team were leading the music ministry for the Masses at the Celebrate Conference.  Its first outing on the lips of the congregation led to a spontaneous explosion of sung praise and thanksgiving as the Communion procession came to an end.  The 1000-strong assembly delighted in the freedom to sing which ever refrain the Spirit moved them to at the time – some were probably even making up their own refrains as they went along.

In some ways, if  Taste & See had never been sung again after its powerfully moving debut in Ilfracombe all those years ago, we would still feel that it had served its purpose.  It is a privilege to know though, that across the ocean worshippers we may never meet will have this octavo in their hands and this song on their lips as they taste and see the goodness of the Lord in their own place and time.