Skip to content
This is a guest post by Martin O’Brien, Artistic Director of Ten Ten Theatre, sharing his extraordinary experience producing a community Passion Play for the Year of Faith.

The Runcorn Passion was a community Passion play performed by the people of Runcorn and Frodsham in the Northwest of England with the final performance taking place in the town’s main shopping centre on Holy Saturday. An astonishing 250 people from the local community signed up. 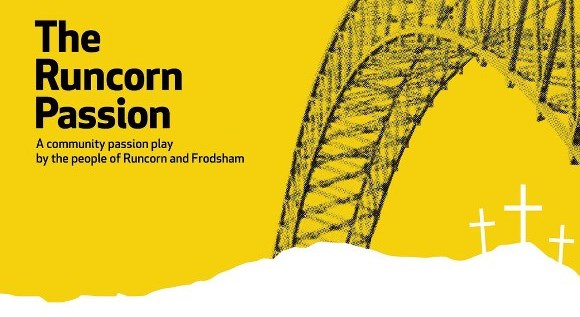 There were parishioners from the various local Catholic churches, children from primary schools, students from secondary schools, and many from other Christian denominations and communities taking part; the youngest was four, the eldest over 80.

Runcorn is my hometown, so this project was very personal to me and also to my family, who founded and run Ten Ten Theatre with me. It is a town which is often cited as one of the poorest in the country with high unemployment and poverty rates.

Moreover, the structures which support the Catholic faith have been slowly eroded due to a severe shortage of priests and a fragile infrastructure; faith is subsequently becoming increasingly private.

So The Runcorn Passion presented a unique opportunity for the church community to come together, find strength in numbers and proclaim what they believe to the wider community.

Inspired by “Born for This”

The basis of our passion play was “Born For This”, the beautiful Boyce-Stanley reflection on the Stations of the Cross in words, music and action. Rehearsals took place over a six-week period.

Each gathering would begin with a time of prayer and reflection on the Passion of Our Lord, followed by an intense but fun session of rehearsals led by professional actors and musicians from Ten Ten.

For this, the participants signed up to various groups: choir, the band, soloists, actors, dancers, readers, prayer leaders, stage managers, marketers, set builders and stewards to name but a few. There was a job for everyone, no matter what experience, interests or skills were on offer, and many took on more than one role.

Runcorn Community Project in the Press

It was a true community project in every sense of the word. At weekends, participants visited shops in the town to display posters in any windows allowed. They hand-delivered flyers about the event to letterboxes throughout Runcorn and Frodsham; the first print-run of 10,000 were dispatched within four days and so a further 10,000 were ordered and quickly delivered.

Children in primary schools worked hard learning songs and sign language, as part of their contribution. The community manipulated every press opportunity available to them, and as result the event was featured in many local newspapers as well as given a prime spot on the local BBC radio station. One well-known disc jockey who lives in Runcorn was assaulted with dozens of emails and calls from local people asking if he could help!

Impact in the Community

It became evident quite early on that many of the people taking part were being deeply touched by reflecting on Christ’s Passion in this way. Each week, we invited participants to write responses to various prompt questions, which proved humble reading; the overwhelming response to the question of ‘what does faith means to you?’ was simply “everything”.

As the final performance at Halton Lea shopping centre approached, so did a growing conviction amongst the participants that they wanted to proclaim their faith to their neighbours, their colleagues, their friends.

There was also, naturally, a reticence. In particular, there was a concern that the shopping centre would attract park-bench drunks who would vocalise their opposition, or teenagers hanging out at the centre who could disrupt and undermine the event.

However, people prayed. They prayed for their own courage, and they prayed that their witness to Christ would touch the hardest-to-reach people.

A week before the event itself, the project was thrown into jeopardy. As the entire company of 250 were about to come together for the one-and-only chance to put all of the elements of the production together, starting with a Mass celebrated by Bishop Mark Davies, the town of Runcorn was buried underneath a rush of snow.

Many roads were shut. The school where rehearsals were due to take place had closed down. The pathway to the hall was lethally icy. We thought that was the end of it. Without a dress rehearsal, the performance would simply not be ready.

By 10.30am, all but a handful had been able to make it, with some trekking miles across town through the snow to get there. The faithful, Spirit-led determination of the community was remarkable.

On Good Friday evening, men from the local community erected a huge stage and PA system in the centre of the shopping centre. Many of these men had not wanted to take part in the performance itself but were willing and eager to help in other practical ways. As they worked, they shared.

I was privy to one particular conversation between two family men about their kids and the challenges of bringing them up within the Church, a conversation which would not have happened if they had not been working together on a project of this nature.

Over one thousand people turned up to watch The Runcorn Passion on Holy Saturday across two performances. Many more shoppers stopped and watched, some for a short time, some for the entire hour-long presentation.

I remember very clearly the face of one woman – a shopper not connected to anyone in the cast – who looked slightly bedraggled and world-weary and yet was utterly transfixed by what she was watching with tears welling up in her eyes. Another teenage girl watching the performance was heard to say, “I’m crying but I don’t I don’t know why.” 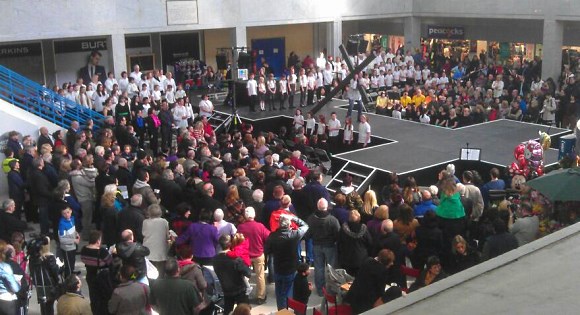 There were one or two moments of disruption when, for example, a drunk made disparaging comments, and a group of teenagers shouted from a distance, but these were drowned out by moments of utter silence and stillness, creating an extraordinary feeling of reverence and prayer on a busy weekend for shoppers. It was a true witness of faith in a very public sphere.

One participant wrote to us afterwards to say that she prayed to the Holy Spirit that her husband would turn up to watch The Passion because he never steps foot in a Church. He did, and was deeply moved.

Another woman, not usually one for religious expression, told us that a couple of days after the event she found herself praying publicly and openly for a stranger who was in need of healing. We heard story after story of how people were affected by the experience, and how faith was shared and grew in so many ways.

In November, the community gathered together again to reflect on all that had been celebrated in their Year of Faith. At this event, we showed a 20-minute documentary filmed during the making of The Runcorn Passion. On film, the people reflected on what they had told us about what their faith means to them and it was very powerful.

One participant said: “I’ve been touched by the faith of others. I really admire this in people and it helps me as a questioning, sometimes wavering and often cynical Catholic to be more grounded in what is at the core of our faith.”

The same weekend as we celebrated the end of the Year of Faith with the community, it was confirmed that a number of parishes in Runcorn would be merging due to a long-term shortage of priests. The challenges for such a change are great; indeed, parishes all over the UK are facing similar challenges.

In Evangelii Gaudium, Pope Francis talks about Pastoral Ministry at a local level. He says,

“I invite everyone to be bold and creative in this task of rethinking the goals, structures, style and methods of evangelization in their respective communities.”

The people of Runcorn and Frodsham achieved precisely this.

The Runcorn Passion proved that, despite the hardship, faith is still strong within these communities. Through faith, the ordinary become extraordinary, the spiritual meets the practical, the lost are found, and the person of Jesus Christ becomes tangible, real and very much alive.