After almost 20 years as one half of the Boyce & Stanley singing, song-writing music ministry duo, Jo Boyce has released her first solo studio recording – a six track EP entitled “In God Alone – Songs of Hope and Consolation“. The subtitle gives a clue to the nature and inspiration for this project. 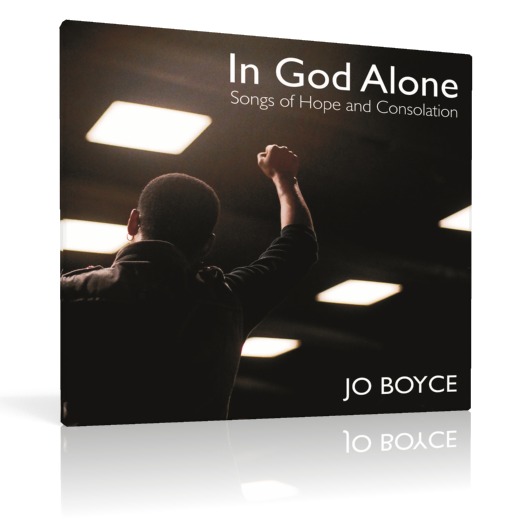 After Mike Stanley’s death in 2013, we knew that the day would come when Jo Boyce would eventually venture back into the recording studio. It’s taken almost two years, and it’s no surprise that Jo wanted this to be more than just a random solo project for it’s own sake.

The thoughtful choice of songs tells the story of this season of change and challenge, and gives thanks to God for his faithfulness in the midst of the storm.

The recording also features the talents of the core musicians and singers of the Collective who have helped Jo to hone a new sound in the past few years. Drummer and guitarist Emily Clark duets with Jo on I Belong, a beautiful song based on Romans 8:38.  Lian Hargreaves and Andrew Moss join Jo in a wonderful re-working of When. And the uplifting final track Great is His Love was co-written with pianist, Andy Ross.

There’s also a guest vocal appearance from the fabulous Edwin Fawcett, singing with Jo on her version of Stronghold – his beautiful setting of Psalm 93. It is a song which earned its place on the EP by giving much-needed encouragement through many difficult days.

These songs are a beautiful and uplifting reminder that when the heartbreaks and challenges of life leave you bereft and undone, all you can do is lean into God and let him be your strength and consolation. #InGodAlone